As the summer launch approaches, we are able to share information about these new traps.  This is the first post in a series looking at the new kitchen moth trap and what makes it different.

The Able Catch Moth Trap tackles moth trap design and literally changed the shape of the moth glue board.  When you think about it, a glue trap folds into itself having some number of sides with a tab on one end and a slot on the other.  Simple… Basic… but worth re-examining.

Nearly every other moth trap folds into a Triangle (with exception Tangle Foot flour + pantry moth trap that forms an arch).

So why change the Try-Angle

The goal of a moth trap is to lure the moth inside, and to have a design that avoids sticking to itself.  But a triangle leaves a lot of space wasted.  in some cases, 50% wasted raps Direct made the Able Catch Moth Trap a Trapezoid , with 4 sides, the very design of the trap stand out in the pack.

Rather than a TRY-angle, the TRAPezoid by definition has a wider entry field allowing more access for male moths to wander into the trap glue field.

Brought to you by: Moth Control Products 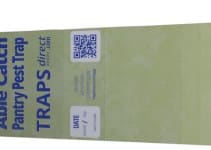 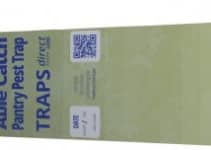